The Saar is a river in France and Germany. At 235 kilometres long it is the largest tributary of the Mosel. Its drainage basin is 7,431 km2 in size, 3,605 km2 of which are in Germany.

The first written record of the Saar (as the Saravus) is found in the poem Mosella by the Roman poet and government official Decimus Magnus Ausonius (310-393 AD).

The Saar gained significance as a traffic route from the 17th century onwards when lumber (‘Dutch lumber’) was transported down the Saar via the Mosel and the Rhine to the North Sea.

The Saar has been connected to the Rhine-Marne Canal at Sarreguemines via the Saar Canal. As part of the construction of the Saar Canal, between 1862 and 1879 the Saar was canalised from Sarreguemines initially to Luisenthal and then to Ensdorf, making it navigable up that point. The Saar cutoff near St. Arnual was built in 1969.

The lower course of the Saar flowing out from the estuary was only developed to allow commercial shipping in 1974: the Konz-Dillingen stretch opened in 1987 followed by Dillingen-Lisdorf in 1994, the Saarbrücken lock began operation in 1999, and the development work was completed in 2001. The Konz-Saarbrücken route stretches for 87.2 km with a height different of 55 m and a channel depth of 3 m. It is a class Vb European waterway. Regular ships include the Europaschiff class with a load capacity of 1.350 tons (length: 85 m, width: 9.5 m, depth: 2.5 m) and pushed barge trains with two lighters with a load capacity of 3.320 tons (length: up to 185 m, width: up to 11.45 m, depth: 2.5 m). There were plans to continue development above Saarbrücken, but these (along with other infrastructure measures) were shelved for political reasons. Commercial shipping therefore ends at the Luisenbrücke bridge in Saarbrücken.

The Saar became a Reichswasserstraße (‘waterway of the Reich’) in 1921, and is now a Bundeswasserstraße (‘federal waterway’) from Sarreguemines to its estuary into the Mosel at the latter’s 200.8-km point in Konz, managed along its 104.7 km length by the ‘Wasser- und Schifffahrtsamt Saarbrücken’. Its distance is measured along the shipping route, which is around 5.5 km shorter than the river’s original length with multiple cutoffs, the one near Kanzem being the longest. It starts in Konz and ends 94.06 km later at the beginning of the German-French border in Güdingen, after which the Lorraine measurement is used from kilometres 75.62 to 64.98 near Sarreguemines. It continues in France along the Saar Canal. 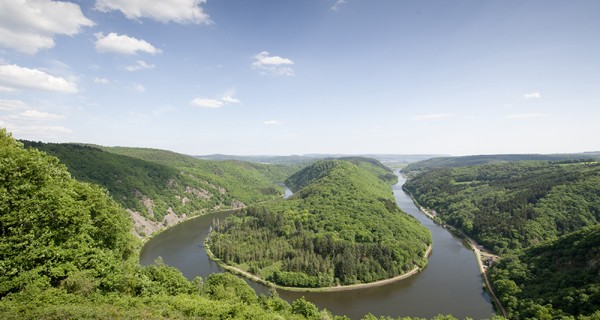